Ooi Kok Hin is a second year Political Science and Philosophy student at The Ohio State University. A fan of WWE, Naruto, and Manchester United.

Recently I watched a video of Zulkifli Noordin, the Kulim Member of Parliament, again raising the “pendatang” (foreigners/immigrants) issue. I was very tempted to go down to his level and throw attacks at the person instead of the argument. I was held back by my watcher who, in a split second, warned me that I was about to commit ad hominem, a tactic which I deplore when others use it. I remembered a friend who used to say “Tuhan kasi akal, gunalah.” (God gives us intellect, use it.) Thus I resort to being a good example and show how to argue in the way an educated person must.

Introducing Zeno of Elea, a colorful figure from ancient Greek. He usually assumed the position of his opponent, proceeded to show how their arguments contradicted each other and showed how ridiculous his or her position is. Zeno’s arguments are characterized by the use of infinite regression and reduction ad absurdum (reduction to absurdity).

It doesn’t end there. Another friend helped me to include science into this debate. Prehistoric life forms exist almost exclusively on water millions of years ago. A basic scientific fact; in which microorganism survives and thrives in the presence of water. You know what this means? All humans are “pendatang daratan” (land immigrants).

A paradox wouldn’t be complete without a twist in seemingly logical premises, which result in contradiction of some premises. Look again at #2. If we are all offspring of the first living organism (be that a microorganism, Adam and Eve, or Homo erectus and Lucy (3 million years old, our oldest ancestors. They will hold the title till we find someone older than them), then it also follows that none of us is “pendatang.” 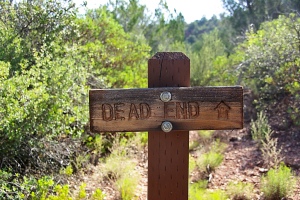 Interesting puzzle isn’t it? My goal is not to contaminate your political belief. By Zeus, no! Let’s leave the political battles for another time. “Be the change you want to witness in this world” Gandhi told us. That phrase is easier said than done. It is tempting to raise our voice and smack labels at the person with whom we disagree. But no matter how ridiculous his or her perspectives are, we must always attempt to correct those views with valid and sound arguments. We are not just being nice to our opponents; we are being true to our principles. Malaysian politics, as elsewhere, is not in an ideal state of maturity. We wish it could be better. We want it to be more mature. Where do you think we must start?

Disclaimer: Road to Unity is a non-political, non-partisan website. Any views that are expressed in the entries posted here represent only the views of their respective authors; they do not represent the views held by Road to Unity.
Loading Comments...
%d bloggers like this: